Recognizing individuals for outstanding career accomplishments and service contributions to the Department of Accountancy, the University of North Dakota and society.

Founder and Chairman/CEO of the Edgewood Group of Companies

Mr. Gisi (Phil) is the founder and Chairman/CEO of the Edgewood Group of Companies, a diverse group of companies spanning the upper Midwest United States.  Edgewood Healthcare is a vertically integrated assisted living and healthcare services company with 64 senior housing facilities with over 4,100 beds in Idaho, Minnesota, Montana, Nebraska, North Dakota, South Dakota and Wyoming. Edgewood Healthcare also provides primary care, home care, therapy services, home health and hospice services across the region.  Over the past 30 years, the Edgewood has grown into one of the largest privately held senior housing and home-based healthcare provider in the upper Midwest.  Other holdings within Edgewood include air ambulances, hotels, restaurants, event centers, ethanol producers and oil field services in North Dakota and Montana.

Phil is the co-founder and President of Aspire Clinical Intelligence LLC, a dynamic electronic health record that provides clinicians with biometric and diagnostic patient data, artificial intelligence, and treatment alternatives for residents with chronic conditions in assisted living and other home environments.

Phil is also the founder and Chairman/CEO of Senior Healthcare Innovation Consortium Inc, a non-profit education and scientific research company dedicated to enhancing the quality, safety and cost effectiveness of home-based healthcare services provided to seniors.

Phil was raised on a farm near New Rockford, North Dakota, and is a 1982 graduate of the University of North Dakota with a Bachelor of Science in business administration and accounting. Gisi first served as the CFO for an oil field service and construction company from 1982 to 1985.  From 1986 to 1996, Gisi served as the vice president/CFO, and president/CEO for St. Joseph’s/UniMed Medical Center, a 200-bed regional hospital in Minot, North Dakota.

Phil’s past board experience includes INREIT Properties (now Sterling Multifamily Trust), the East Grand Forks Chamber of Commerce (where Gisi served as chair), and the Alumni Advisory Council of the University of North Dakota College of Business and Public Administration. From 2009 to 2020 Gisi served as a community board member and secretary of Altru Health System of Grand Forks, ND, and from 2009 to 2021 a board member of the University of North Dakota Alumni Association Foundation.  Gisi also served on the board of directors of Tulsa, Oklahoma-based Cypress Energy Partners LP (NYSE: “CELP”) from 2013 to 2016, during which time the company went public.

Phil continues to be active on local boards including board advisor for Red Trail Energy LLC, an ethanol plant located in Richardton, North Dakota; board member and co-chair for the UND Center for Innovation Foundation in Grand Forks; board member and secretary of Altru Care Flight, an air ambulance service based in Grand Forks; and an advisor to the Dakota Venture Group, a UND student-run venture capital company.  Phil and his wife, Patricia, have two children and live in Grand Forks, North Dakota.

Feragen began her professional accounting career at KPMG, and then pursued a career in corporate accounting and finance, including positions at Conwed Corporation, BMC Industries and National Computer Systems prior to joining Hormel Foods.

Feragen currently serves on the boards of Patterson Companies and Graco, Inc. She served for eight years on the University of North Dakota Alumni Association and Found board, chairing it from 2015-2017.

Feragen has been married to fellow UND Accountancy alumnus Duane Feragen for more than 42 years. They have two daughters, Kari Turtinen (Erik) and Kelsey West (Shaun), and four grandchildren, Easton Turtinen, Everly Turtinen, Walter West and Mae West.  The Feragens spend winters in Arizona and summers at their home on Shell Lake in Wisconsin. Feragen enjoys.

After a forty year career with the firm, Dave Stende retired from Eide Bailly in April 2022.  As his career ended, Eide Bailly, a CPA and Business Advisory firm, was the 19th largest firm in the country with over $500 million in revenue and a team of 2,700 people.  The firm had 41 offices in 14 states and an office in Mumbi, India.

During his career he served as an audit partner and later held various firm leadership roles including the Partner-In-Charge of the Fargo office, the COO of the firm for seven years and spending his final nine years with the firm as the CEO.

During his tenure as CEO, he oversaw dynamic growth in the firm with revenues growing by 335%.  The growth was driving both organically and through acquisitions.  A key to organic growth was the diversification of services including areas like technology consulting, data analytics and cyber services, to name a few.  In addition, he led the strategy for acquisition growth by acquiring approximately 30 firms during his time as CEO.

The firm is known for its outstanding culture and investment and training of its people.  He was focused on maintaining, and continuing to improve, that culture even with the rapid growth.  He had a deep commitment to be a “people first’ firm.

Dave has been as speaker as various industry meetings and was named one of the top 100 individuals in the profession in 2016.  He has served on the board of the Fargo-Moorhead Community Theatre and the Fargo Marathon.

Dave is married to Tonya and has two adult children.

Josh Nelson is a Grand Forks native and 2002 graduate of Red River High School. Both his academic and business careers have followed atypical but purposeful paths that have been influenced by experience and personal relationships.

After completing an Auto Body Repair program at Wyotech, Nelson began working at the Rydell GM Auto-center in Grand Forks. His path to studying business began when friends referred him for some part-time work at Little Caesars. After a year and half of working part-time, Nelson was offered the general manager position, and this was when he decided to go back to school to pursue a business degree. During his second accounting class at UND, Nelson talked to his professor and decided to pursue an accounting major.

As a UND student, Nelson was very involved on campus and got to know many of his professors. Whether participating as a member or supporting activities through part-time work, Nelson was involved with college, university and community activities of every variety.  In 2011 he participated in the summer in China program.

Nelson graduated with a Bachelor of Accountancy in 2014 and began working at Oxford Realty in Grand Forks. Following his wife’s graduation in 2015 (also with a Bachelor of Accountancy degree), Nelson joined HMS Host as a staff accountant overseeing reporting for restaurants in the MSP Airport. Abi Nadeau, a friend and fellow UND alumnus, encouraged Nelson to make a move into public accounting, and Nelson joined her firm, CLA, in the dealership group.

While working in public accounting, Nelson began pursuing entrepreneurial endeavors with friends, including investing in the launch of Petopia in Grand Forks, a portfolio of residential real estate properties, and Rainbow Laundromat in Minneapolis. Nelson continues to work full-time in private accounting at Jaybird Senior Living, but in the near future he expects to be fully engaged in managing and growing his growing portfolio of entrepreneurial endeavors. 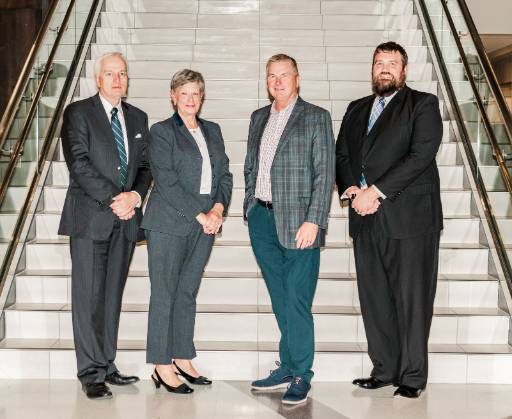 Past Hall of Fame Recipients